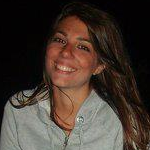 I’m Ioanna Liakopoulou,I’m 27 years old and I have a Bachelor’s degree in Classical Studies.The past 4 years I’ve been working as a private tutor for Secondary education pupils and since 2010 as a special educator for children with special needs as I attended an one year seminar in Special Education.Since May 2012 I’ve been also working as a Greek Sign Language instructor.

2012 March – 2012 May: Hellenic Federation of the Blinds
Braille writing system-Certificate of knowledge of the Braille system